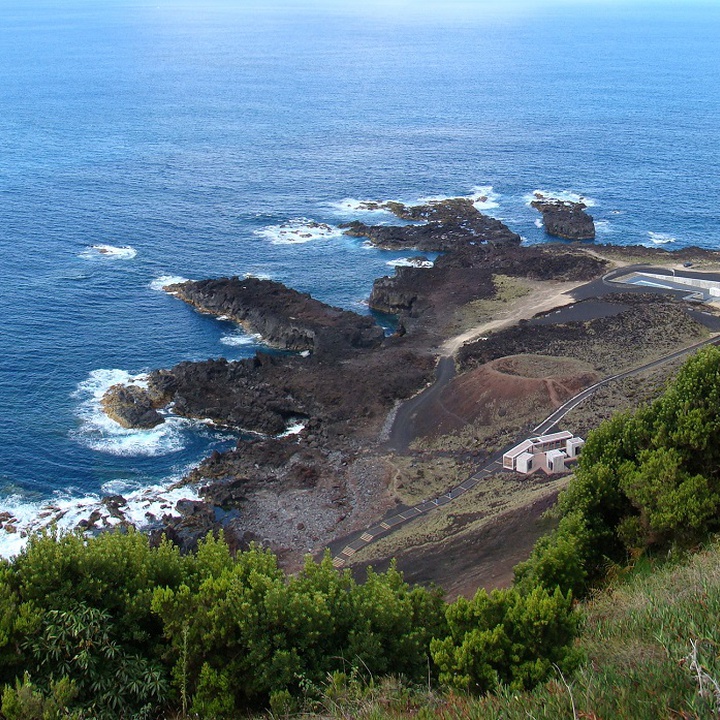 The trail of Pico das Camarinhas – Ponta da Ferraria begins near the viewpoint of Ilha Sabrina, known like that due to an historical volcanic eruption in 1811 that gave birth to a small Island about 6 km southeast of Ponta da Ferraria. This new island, extremely vulnerable to the erosive action of the waves, disappeared a few months later and today there is only a low-lying area.

Begin the trail towards Pico das Camarinhas, a cone of basaltic slags, where you should go up by a dirt road towards the top. Here, there is a wide view either to Ponta da Ferraria as well as to the village of Ginetes and Pico do Cavalo. From here, it is possible to see the alignment of three craters with west-east general orientation, typical of a fissure volcanism. Ahead, you should walk down the trail, going around the two coalescence craters and arriving to Caminho Velho, you should turn right where it is possible to see a trachytic dome. Reaching the crossroad you should turn right again through the street, Rua Ilha da Sabrina, towards the lava cliff of Ferraria.

The trail continues heading the natural thermal swimming pool, where you can have a bath, in the ocean, with temperatures above the 30oC, during the low tide. The springs of thermal waters contributed for the construction of the Thermal SPA of Ferraria.

The walk later proceed towards the viewpoint of Ilha da Sabrina, where it ends. In case you wish to do some more meters, in this viewpoint there is a small shortcut until the lighthouse of Ferraria.