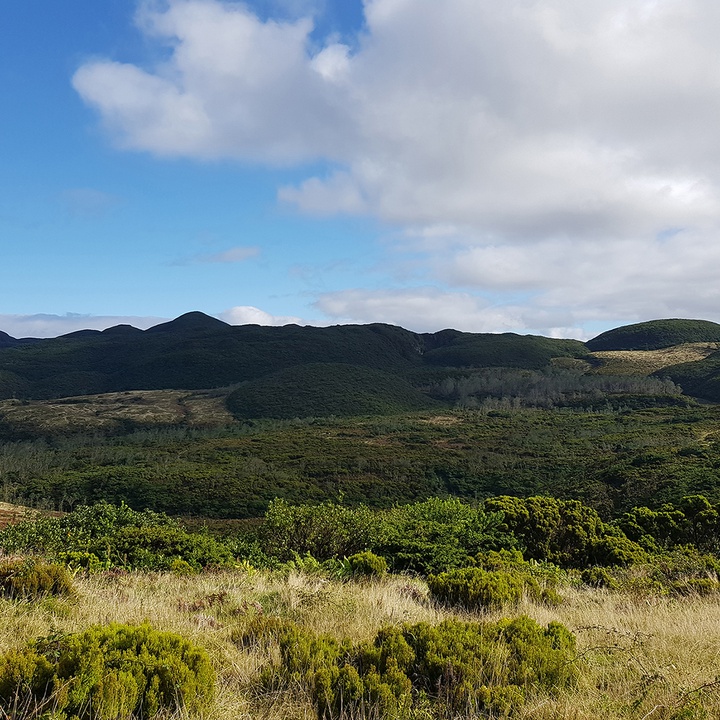 Located in the central-north region of the island, this area occupies about 709 hectares and has a maximum altitude of 809 metres.

The Pico Alto is the most recent central volcano of the island, with about 100 thousand years. The walls of its collapse caldera are currently visible only in the Serra do Labaçal, Caldeira da Agualva and Rocha do Chambre, because this depression is filled with a significant number of domes and very thick siliceous lava flows, named coulées. These domes and coulées, more than half a hundred, are locally known as “biscoito” (biscuit) and define important tectonic alignments of the Pico Alto Volcano and of the island.

Regarding vegetation, predominate wet formations – forested peatbogs of Juniperus brevifolia and peatbogs of Sphagnum sp. – and the forest known as the Laurel Forest of the Azores, dominated by Laurus azorica and Ilex azorica. Of the endemic flora, stand out the species Vaccinium cylindraceum and Lactuca watsoniana and the native ferns Culcita macrocarpa, Blechnum spicant and Woodwardia radicans.

Regarding fauna, the resident birds are the most frequently observed, such as the Scolopax rusticola and the Gallinago gallinago, and endemic subspecies such as the Turdus merula azorensis, the Sylvia atricapilla atlantis and the Regulus regulus inermis. The bird of prey Buteo buteo rothschildi is also easily observed in this area.

It is possible to explore part of this protected area through the Rocha do Chambre walking trail (PRC06TER).

This area comprises a Special Area of Conservation (SAC) within the Natura 2000 network, a Ramsar Site under the Ramsar Convention and is classified as a geosite of the Azores UNESCO Global Geopark.