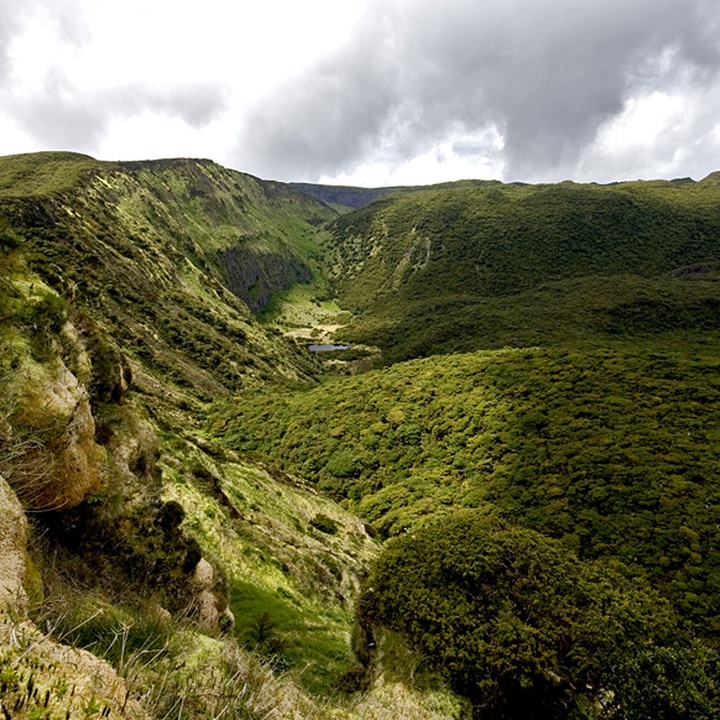 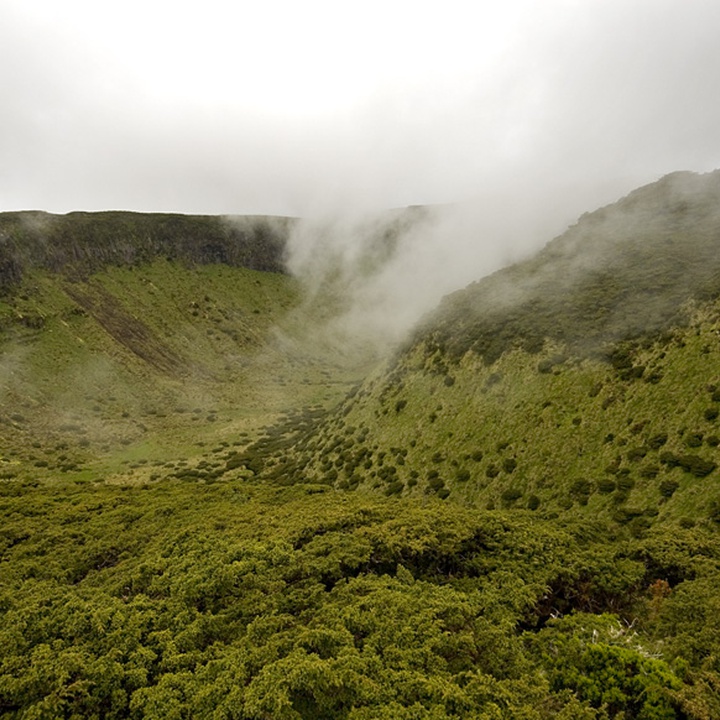 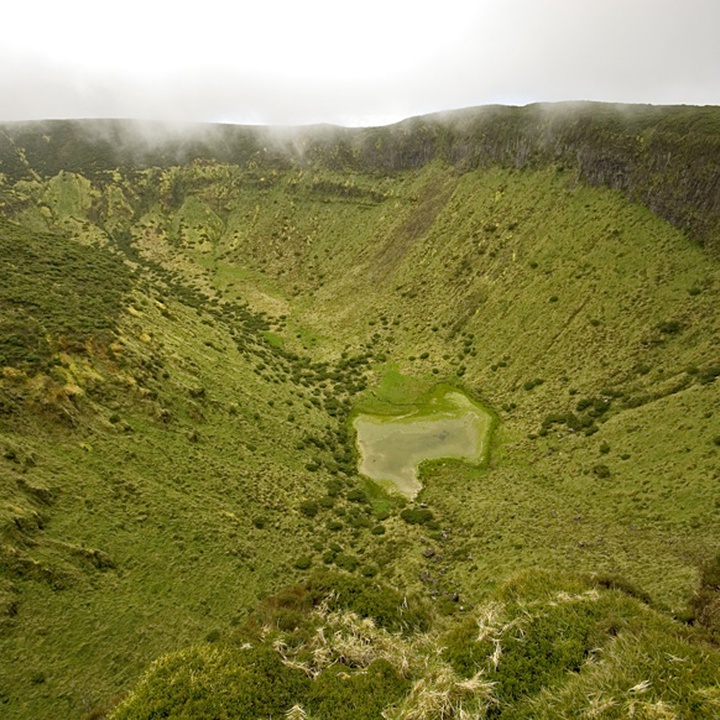 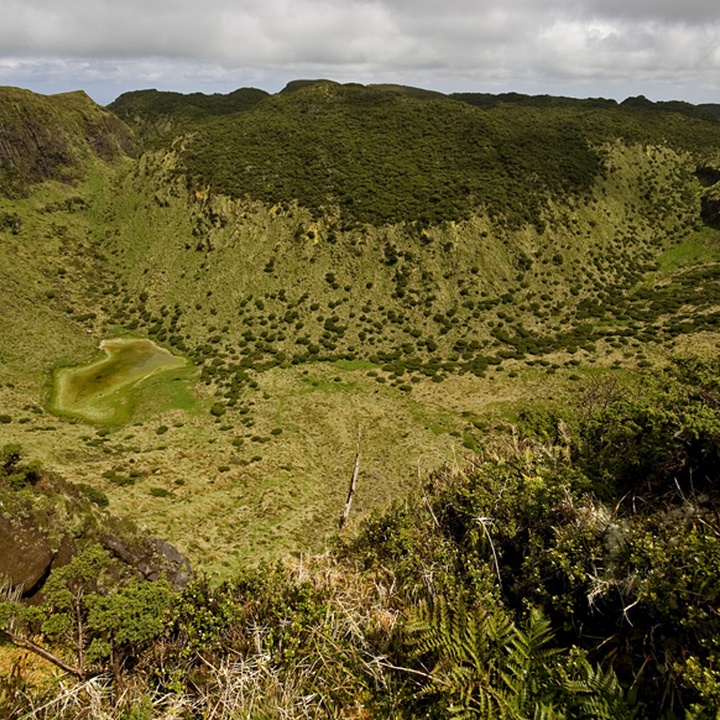 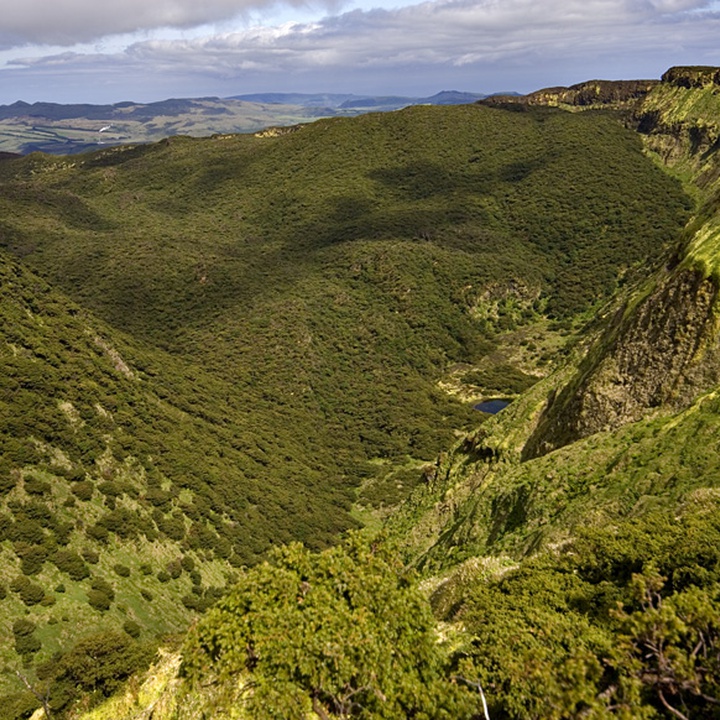 Located on the west zone of Terceira, this Nature Reserve occupies an area of about 1587 hectares and has the island’s highest point with 1021 metres of altitude.

Serra de Santa Bárbara belongs to the central volcano of Santa Bárbara, which top displays a double caldera formed by two main collapse episodes, the first of which occurred about 25 thousand years ago. This east-west elongated caldera, associated with the first episode, shows a maximum depth of about 200 metres with a maximum diameter of 2.5 kilometres and a minimum of 2 kilometres. The youngest caldera, associated with the second episode, is placed inside the first depression and is partially filled by trachytic domes.

At the flanks of Santa Bárbara Volcano, besides the several basaltic eruptive centres (like scoria cones), occur about 85 domes and coulées (thick lava flows) of trachytic nature, which define important volcano-tectonic alignments, as the Mistérios Negros domes, related to the historical eruption of 1761.

In this protected area, it is possible to observe the ancestral and natural landscape of the Azores cloud forest, one of the rarest and most valuable plant formations, mainly covered by the endemic species Juniperus brevifolia and associated with other endemic species such as the Vaccinium cylindraceum, the Ilex azorica, the Erica azorica and the Laurus azorica. Numerous mosses cover the waterlogged soil, forming a wetland complex where occur peatbogs mainly of Sphagnum sp. Also stands out the presence of rare species of endemic flora such as the Angelica lignescens, the Euphorbia stygiana stygiana and the Lactuca watsoniana.

Regarding fauna, it is noteworthy the species of resident birds such as the Buteo buteo rothschildi, the Columba palumbus azorica, the Turdus merula azorensis, the Erithacus rubecula, the Fringilla coelebs moreletti, the Sylvia atricapilla atlantis, the Motacilla cinerea patriciae, the Regulus regulus inermis, the Scolopax rusticola and the Gallinago gallinago.

It is possible to cross several sectors of this protected area through the Mistérios Negros (PRC01TER) and the Serreta (PRC03TER) walking trails.

The Serra de Santa Bárbara Environmental Centre is located in the south flank of the Santa Bárbara Volcano and has information about the natural heritage of Terceira Island.

This area integrates a Special Area of Conservation (SAC) within the Natura 2000 network and is classified as a geosite of the Azores UNESCO Global Geopark.