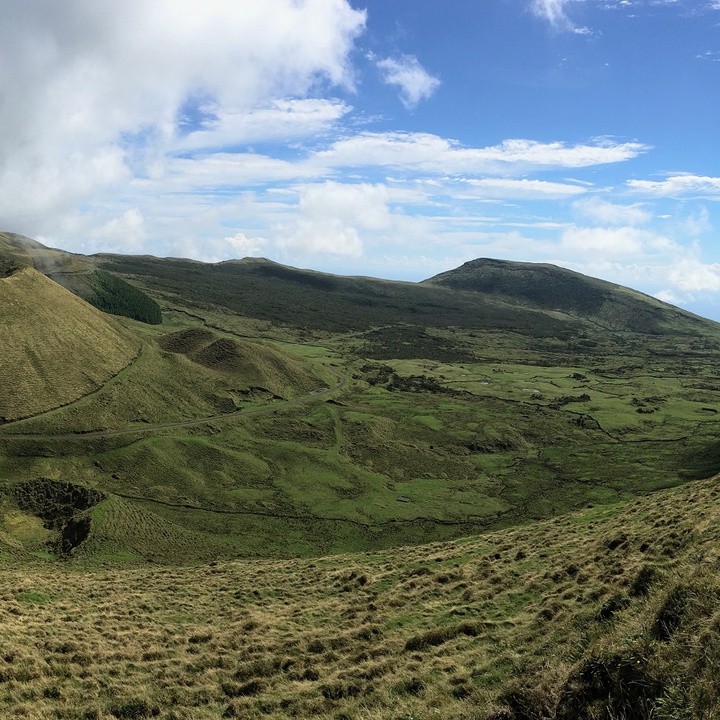 Located north of Lajes do Pico, this area has about 266 hectares, with its highest point at 1076 metres.

This area predominantly integrates geological formations of the Planalto da Achada, which is subject to conditions of extreme humidity, drenching and permanent fog. These conditions allow the emergence of peatbogs and humid habitats that play a predominant role in the regulation of the island’s hydrological system, besides their environmental interests.

The Planalto da Achada is a volcanic ridge that extends for about 30 kilometres, from Lagoa do Capitão (lagoon) to Ponta da Ilha, in the island’s eastern end, and integrates around 190 volcanic cones. This zone of fissural volcanism is mainly constituted by scoria cones and basaltic lava flows of recent age, this is, under 10 thousand years. At south, these lava flows contact with the geological formations of Topo Volcano, a shield volcano with 1022 metres of altitude and highly affected by tectonics and erosion processes.

In this place, there are species typical of humid habitats such as Sphagnum sp., Eleocharis multicaulis and Juncus spp., and of the so-called cloud forest, where stands out the presence of Ilex azorica and Juniperus brevifolia.

The local geology and flora allow for the occurrence of diverse fauna, with the presence of the species Hipparchia azorina, Cedrorum azoricus caveirensis, Turdus merula azorensis, Regulus regulus inermis and Nyctalus azoreum, the only endemic mammal known in the Region.

It is possible to cross this area through the Caminho das Lagoas (PR19PIC) walking trail.

This area is included in the Zona Central do Pico Special Protection Area (SPA) and the Montanha, Prainha and Caveiro Special Area of Conservation (SAC) within the Natura 2000 network, in the Zona Central do Pico Important Bird and Biodiversity Area (IBA) of the BirdLife International organization, and in a Ramsar Site under the Ramsar Convention. Caveiro zone is also integrated in the Planalto de Achada geosite of the Azores UNESCO Global Geopark.