From the Garden of Praça do Infante (south end of the city’s Main Avenue), in front of Marina of Horta, go down to the south, through the traditional cobblestone path towards the Porto Pim Beach. After passing the Hotel Canal on your right, turn left at the next intersection and walk about 600 meters until you reach the car park. Then, turn right towards the beach and follow the path next to it. You will find the Dabney’s House on your left. 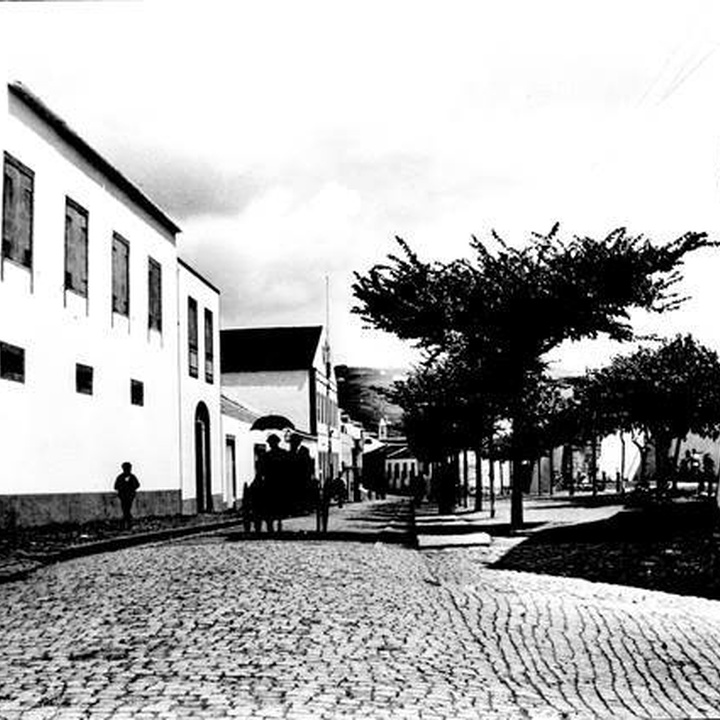 This Circuit follows along with one of the most important historical periods of Faial island in the 19th century.

The Dabney family lived on this island for three generations for 86 years and was responsible for a unique period of prosperity and political influence. This Circuit brings those memories to the present, passing through the family residences and the places used for business or simply for leisure, some of them included on the Monte da Guia and Zona Central Protected Landscape Areas.

The Circuit goes through the following points of interest:

It is the old summer house of the Dabney family bought by Charles W. Dabney in 1855. This house was part of a residential complex that included the house where the family used to rest, a cellar to produce wine, a small pier with a shelter for two boats and a viewpoint surrounded by vineyards. It was the favourite place of the last two generations of the family to rest and leisure. At the beginning of summer, they used to leave their residence in the city to stay here until the end of October. Nowadays, it is property of the Regional Government of the Azores, operating as the Headquarters of the Faial Environment and Climate Change Service and as Dabney’s House, being part of the Monte da Guia Complex.

Also known as Old Whaling Station, the Tuff House was built in 1836 by the Lisbon Fisheries Company to dry the codfish caught in Terra Nova at the Monte da Guia hillsides. However, the high humidity did not allow this project to succeed, so Charles W. Dabney bought it in 1855 and converted it to the first whale oil extraction station of Faial. It closed in 1942 due to the construction of the new Porto Pim Whaling Station. Today, it is owned by the Regional Government of the Azores and houses the Live Fish Station operates – Porto Pim Aquarium, being part of the Monte da Guia Complex.

Due to its natural protection and the possibility for large ships to anchor in excellent shelter conditions, Horta bay was fundamental for Dabney’s businesses and commercial success. The exportation of wine, orange, limes, tangerines and products from the whale hunting developed by this family was made through this bay, mainly to the harbours of the United States, Europe and Baltic, and even reaching India and Macao. Charles W. Dabney was one of the most important figures for the construction of the artificial harbour in 1876.

The “Dabney & Sons” commercial house used these warehouses to store the goods to export. The wine was acquired from producers of Pico island and stored here to be enriched with brandy and heated to accelerate the process of ageing and reduce the deterioration.

The oranges wrapped in dry corn leaves and the barrels of sperm whale oil were also stored here, awaiting the arrival of the ships between the end of October and the beginning of May. Now it is private property, with touristic and commercial facilities.

This building was the offices of the “Dabney & Sons” commercial house. Due to its proximity to the Horta Harbour, it was here that most businesses were discussed and contracts signed. It was also a residence for friends and family members that visited the Dabneys. Nowadays, this building is used by public services.

Formerly known as Canada do Beliago, it was elevated in 1863 to Consul Charles Dabney Street by the Horta City Hall, in tribute to the family and all the help given to the inhabitants of Faial. Later, in 1877, the City Hall unveiled his photo in the Noble Hall of the Town Hall. His philanthropy earned him, after his death, the epithet of “Father of the Poor”.

Charles William Dabney bought this house in 1835. This propriety had several houses, a cistern, a mill, a garden and a greenhouse and after being remodelled, he and his son, Samuel Dabney, used it as their residence and official consulate. In 1858, it was chosen for a ball in tribute to the Portuguese Prince D. Luís, who was the Portuguese king between 1861 and 1889, as D. Luís I. In 1899 the heirs of Samuel Dabney sold it to the “Europe & Azores Telegraph C.º” and in 1969 was adapted into a kindergarten, use that it still has nowadays.

This house was built in 1851 by the oldest son of Charles Dabney, John Pomeroy Dabney. Here occurred several cultural events of the city, and it was John's official residence until the beginning of the 19th century when it was sold by his daughter, Sarah, to the telegraphic cable company “Commercial Cable C.º” as the residence of its director. It was later bought by the Regional Government and is currently the official residence of the President of the Legislative Assembly of the Azores.

In 1862, the Horta City Hall donated a plot of land in the non-Catholic area of the Carmo Cemetery to the Dabney family for its philanthropy and as a gesture of gratitude. In the following year, the City Hall had a memorial constructed in their honour with the following inscription: “Memorial of gratitude from the City Hall on behalf of its citizens to Mr Carlos Guilherme Dabney and his family for their philanthropy and acts of dedication to the inhabitants of Horta district, 1863”. Here lie 14 members of the Dabney family.

Bagatelle was the first residence of the Dabney family and was built during the Anglo-American War (1812-1814). Frequently visited by friends, family and foreigners that stopped at the Horta Harbour, it hosted a ball in honour of Pedro IV in 1832 and the Prince of Joinville, son of the Kings of France, in 1834. Nowadays, it is private property.

It is the old hunting house that the Dabney family used to own in the Capelo parish, near to the building where, nowadays, is the Parish Council. It was the place chosen by the family for the hunting excursions of Scolopax rusticola, Columba palumbus azorica, and rabbits, or simply to rest. It was frequent to see several members of the family horse riding around the parish, most of the time to Porto do Comprido, where a fishing and whale hunting station existed.

The construction of this tank to receive the water from the springs in Caldeira and the house and washing tanks was funded by the Dabney family to help and improve the lives of the people of Capelo parish, which was predominantly rural and quite isolated from the other villages on the island. It was the first place in the parish to have potable water from springs near the Caldeira. Here, it was frequent to see washerwomen washing their clothes in the tanks and talking about their daily issues, becoming a place of conviviality and remembrance.