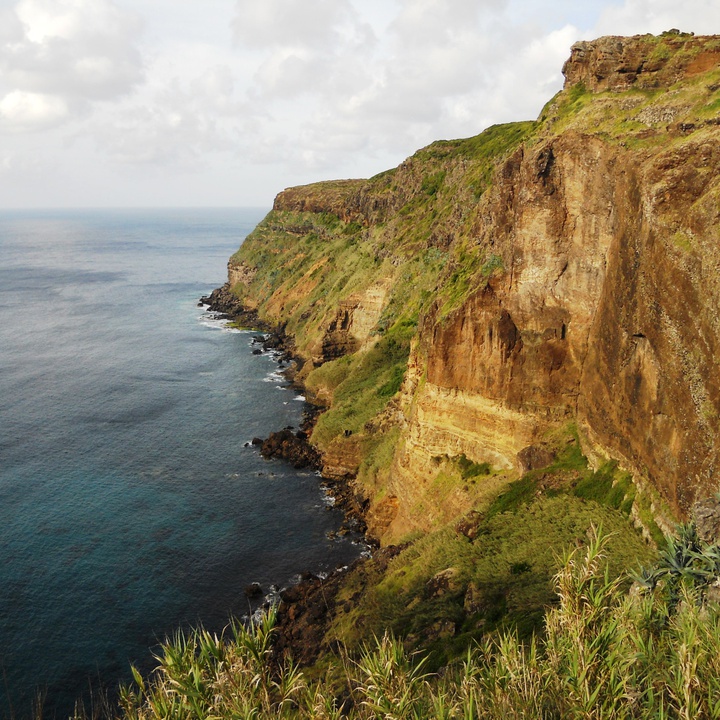 Located north of the island, this area of 2458 hectares comprises the marine zones of Praia dos Lobos, Baía dos Anjos, Baía da Cré, Baía do Raposo and Baía do Tagarete (bays) until Ponta do Massapês, on the east end of the island’s north coast.

The Costa Norte bays are characterized by high sea-cliffs of abrupt relief, which resulted from the marine erosion that shaped the coast of the island. These sea-cliffs are formed by subaerial basaltic lava flows interspersed with sedimentary rocks, like calcarenites and fossiliferous conglomerates, including also outcrops of submarine lava flows and dykes.

Baía do Raposo and Baía do Tagarete have unique waterfalls, standing out, on the latter, the deeply embedded valley and the meanders of Ribeira do Amaro.

The sea of this protected area is characterized by high biodiversity, with favourable conditions to serve as a nursey to numerous marine species. In the tidal pools of Baía do Tagarete, several species of algae are visible in a dense green and brown layer, as the Laurencia viridis, the Saragassum vulgare, several species of the Cystoseira genus, the Fucus spiralis (fava-do-mar), among others. It is frequent to observe several species of starfish and sea cucumbers, Diplodus sargus (sargos) and Parablennius parvicornis (cabozes).

It is also included a rocky elevation located near the coast, called Ilhéu das Lagoinhas (islet), with about 60 metres high and steep slopes. This area and the Costa Norte bays house cavities ideal for seabirds nesting such as the Sterna dougallii (garajau-rosado), the Sterna hirundo (garajau-comum), the Calonectris borealis (cagarro) and the Puffinus lherminieri baroli (frulho). This islet and the adjacent coast are classified as an Important Bird and Biodiversity Area (IBA) of the BirdLife International organization.

The Costa Norte (PR01SMA) and the Great Route of Santa Maria (GR01SMA) walking trails allow crossing this protected area, which includes geosites of the Azores UNESCO Global Geopark and class 2 and 3 fossil deposits of the Santa Maria Paleopark.