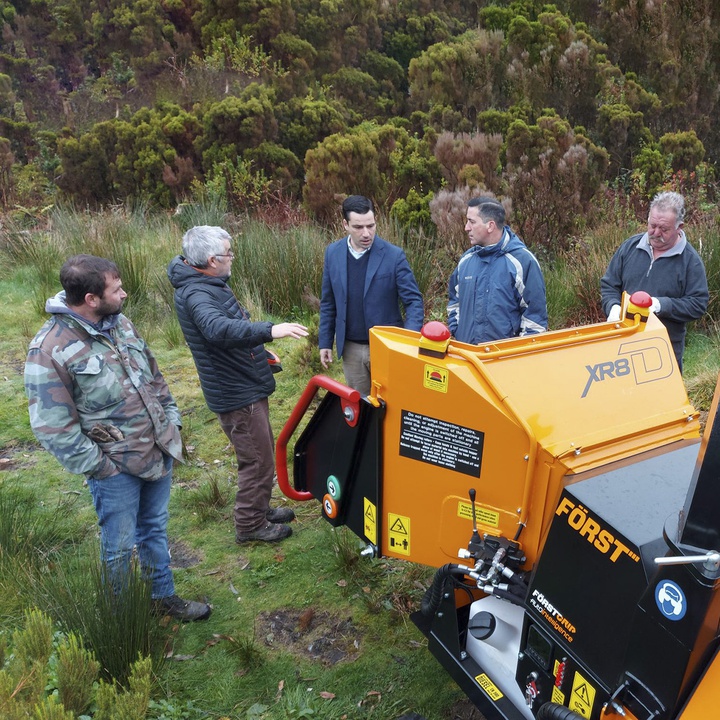 Secretariat for the Environment and Climate Change acquires a plant biomass grinder, within the scope of the LIFE BEETLES project

The Regional Secretariat for the Environment and Climate Change, Alonso Miguel, visited today the LIFE BEETLES project's intervention area on the Algar do Carvão eucalyptus forest, on the island of Terceira, to deliver a plant biomass grinder.

According to Alonso Miguel, “the LIFE BEETLES is a nature conservation project that represents an investment of 1.76 million euros, co-finance in 55 % by the European Union, to be carried out over a period of five years. The project aims to increase the size of populations, area of distribution and conservation status of three endemic beetle species: Ironclad Beetle (Tarphius florensis) on Flores island, and the Ground Beetles Pseudanchomenus aptinoides on Pico island and Trechus terrabravensis on Terceira island”.

The Regional Secretary explained that “the works to carry out on the island of Terceira cover an area of around 107 ha, intending to control invasive plant species in pristine areas of habitat for the target species and to carry out the reconversion of planted eucalyptus forests in patches of Laurel Forest.”

“In the particular case of the eucalyptus forest of Algar do Carvão, targeted and controlled cutting of the eucalyptus trees is being carried out, to avoid damage to the endemic understory, which is quite developed in this area”, he added.

According to the official, “to reduce the amount of biomass generated by the cutting of these large eucalyptus trees, the Regional Secretariat for the Environment and Climate Change, within the scope of the LIFE BEETLES project, acquired an autonomous plant biomass grinder, in an investment of around 90 thousand euros.”

“This equipment, in addition to having a great capacity for crushing biomass, allows access to areas that are difficult to reach without jeopardizing the integrity of the endemic species, allowing it to operate throughout the entire length of the eucalyptus forest. In addition, the resulting crushed plant material (chips) is very useful for covering the soil in areas with endemic flora plantations. Either because of its high water retention capacity or because it forms a covering that prevents new specimens from sprouting invasive plants”, added Alonso Miguel.