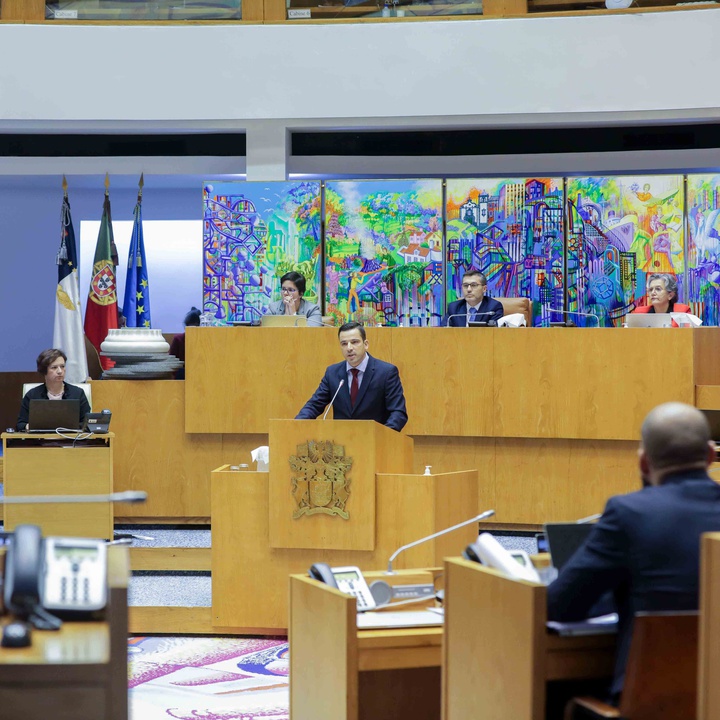 Intervention of the Regional Secretary for the Environment and Climate Change

The complete text of the intervention of the Regional Secretary for the Environment and Climate Change, Alonso Miguel, today, in Horta, at the discussion of the Plan and Budget for 2023:

“The discussion of the Plan and Budget for 2023 marks the conclusion of the first half of the current legislative period.

It is a key moment that forces us to firmly perspective the future but also allows us to look carefully and with satisfaction at the journey so far. It is, therefore, an opportunity to plan all that remains to be completed but also the moment to see how much has already been achieved and the achievements already placed at the service of the Azoreans. The SRAAC's Investment Plan for 2023 presents an allocation of approximately 32.2 million euros, of which 13.4 million correspond to investment in public works, with a predominance of coastal protection interventions.

Climate change represents one of the greatest challenges we face. It is, therefore, urgent to act. In this context, we will continue to implement the LIFE IP CLIMAZ project, with a total investment foreseen in this Plan of around 3.5 million, of which around 1.4 million will be implemented by this secretariat. Under the REACT-EU Programme, relevant projects will be concluded within the scope of the fight against climate change, which began in 2022, with a planned investment for 2023 amounting to around 6 million euros.

Regarding the Roadmap for Carbon Neutrality of the Azores, in 2022, we started the production of sectoral and territorial good practice guides and the study for the creation of new competitiveness clusters. In 2023, is also foreseen the design of financial instruments for carbon neutrality.

Under the Melhoria do Conhecimento da Localização e Estado de Conservação dos Solos Orgânicos e Turfeiras project (Improve Knowledge of the Location and Conservation Status of Organic Soils and Peatbogs), in 2022, the analysis of the distribution and characterisation of peatbogs in the Azores began. By the end of 2023, land will be acquired for implementing permanent plots for protecting and restoring peatbogs.

Regarding the risk mapping project for climate change mitigation and adaptation, in 2022, equipment was acquired for capacity building in the field of cartographic production, with an investment of about 450 thousand euros. By the end of 2023, will be completed the procedures for producing topographic and thematic vector cartography.

Regarding the project for implementing a flood warning system in river basins at risk, after the selection of sites, in 2023, will take place the installation of equipment, the construction of infrastructures and the creation of the management platform.

It should also be highlighted, in this plan, the Legal and Financial Regime of support to the climate emergency, which has a budget of 400 thousand euros to support the populations following storms.

The Portuguese Institute for Sea and Atmosphere (IPMA) is also in the process of installing two weather radars on São Miguel and Flores by the end of 2023, thus significantly increasing our weather forecasting capacity.

Another priority of governmental action under the jurisdiction of this secretariat is nature conservation and the preservation of biodiversity. In this context, with an investment of around 2.5 million euros planned for 2023, of which 1.4 is to be executed by SRAAC, we will continue with the LIFE IP AZORES NATURA, LIFE VIDALIA, LIFE BEETLES and LIFE SNAILS projects.

Also noteworthy is the study on the Control of the Proliferation of the invasive algae Rugulopteryx okamurae in the Azores Coastal Areas under a protocol signed with the Environmental Fund.

In terms of the operationalisation of measures to promote environmental quality, a new project for the bioremediation and restoration of contaminated soils, under a protocol signed with the Environmental Fund, in the amount of 500 thousand euros, stands out.

Concerning the improvement of waste management and fostering the circular economy, the process of reviewing the Strategic Programme for Waste Prevention and Management has been concluded, and being expected to be sent to this Parliament by the end of this year.

The project to restructure the CPRs in the region is also underway to adapt the selective bio-waste collection composting process of Flores, Faial, Pico, São Jorge, Graciosa and Santa Maria islands. Equipment will be acquired by the end of 2022 to improve the operation of the 6 CPRs, in an investment of over 2.3 million euros. In 2022, the Deposit System for non-reusable Beverage Packaging in the Azores was also implemented, under which more than 3.5 million packages have already been taken back. For 2023, the development of a mobile application for the system is also expected to be concluded. It is also important to highlight the start of the implementation of the Regional Plan for Radon. After the first samplings in 2022, and based on the samplings to be carried out in 2023, we will be able to start drawing up a map of the susceptibility to radon in the Azores.

In terms of land use planning, at this time, five sectoral programmes and six special land use plans, 18 Municipal Master Plans and three detailed plans are under evaluation, amendment and review.

After concluding the amendment to the São Jorge POOC, in 2023, we will conclude the amendment of the Terceira and São Miguel POOCs, and we will start the amendment processes for the Santa Maria, Graciosa, Flores and Corvo POOCs.

Another priority in this plan's options is the appropriate management of water resources. To this end, we will continue to monitor, maintain and upgrade the Region's hydrographical network, with a planned investment of around 1.8 million euros.

At this time, the processes of amending the Regional Water Programme and revising the Azores Hydrographic Region Management Plan, both currently under consideration by this Parliament, have been concluded. Still in 2022, it is also expected to conclude the review of the Region's Flood Risk Management Plan and the Drought and Water Scarcity Management Plan.

Regarding investments in public works, which amount to 13.4 million euros, we highlight the investments of 8.1 for the management and requalification of the coastline, two for interventions in the CPR and 1.3 for planning and environmental promotion.

It is an Investment Plan with a marked sense of governmental responsibility, which confirms a new paradigm of public policies, which consummates the passage from words to deeds and reflects a new cycle of progress and development for our islands. Our commitment is to serve the Azoreans and to build, with conviction, the path to the future. We will not falter!”