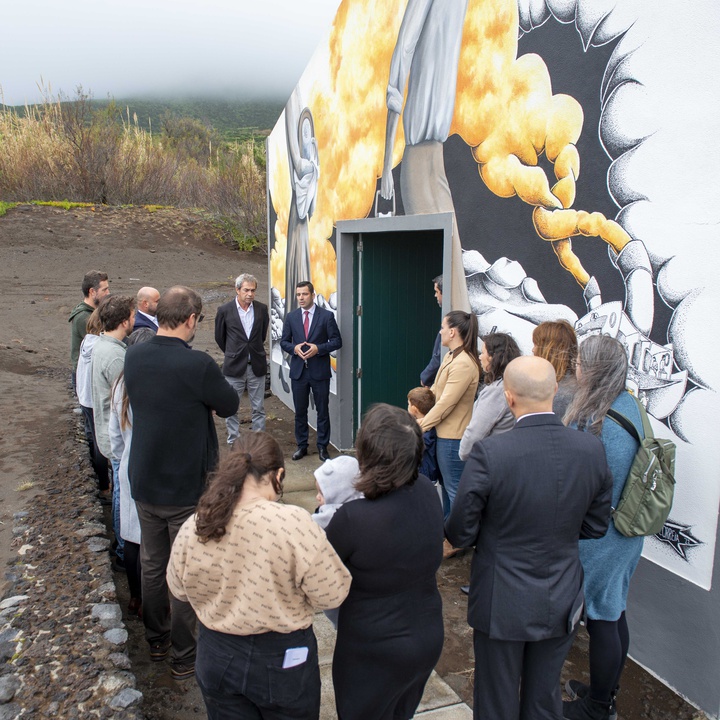 The Regional Secretary for Environment and Climate Change, Alonso Miguel, inaugurated, as part of the closing celebrations of the 65th anniversary of the Capelinhos Volcano, a mural entitled “The Victims of the Volcano” in Casa dos Botes, designed and executed by artists Ana Correia and Pedro Braia, at the request of the Regional Government.

Alonso Miguel highlighted, on the occasion, the “involvement of the population in this programme, which aimed to demonstrate the importance of valuing the historical and natural heritage” of the Region.

“Starting by sharing the testimonies of those who lived and experienced this eruption, the participants also had the opportunity to walk the mythical Whalers' Path,” he said.

The governor also highlighted “the visits organised to the Environmental Interpretation Centre with educational establishments, users of social support institutions and intergenerational groups, which resulted in the exchange of knowledge and very enriching experiences, not only for the participants but also for the technicians of the Secretariat that narrate this event to those who visit daily”.

“The creation of this mural aimed to pay tribute to all those who suffered with this unforgettable event, as well as to keep alive the memory of the eruption that drastically changed the island of Faial, economically, demographically, culturally and socially,” he stressed.

Alonso Miguel pointed out that “over 13 days, representing the 13 months of duration of the Capelinhos eruption, we saw the birth of a sublime memorial, which greatly honours and perpetuates the history and relevance of these difficult moments in the lives of so many inhabitants of the island and also of the seasonal inhabitants of the whaling village, which this house represents, and which was destroyed by the eruptio. This volcanic event marked the definitive end of whaling in Porto do Comprido”.

According to the Regional Secretary, “the building recovered in 2011, which now eternally bears this splendid and striking image, was an extension of the Old Whaling Factory in the bay of Porto Pim, and was the most important sperm whaling station on the island of Faial”.

The Regional Secretary highlighted that “the House has an original whaling boat, the Senhora Santana, and an exhibition that allows to closely discover and relive the environment of what was one of the most dangerous and heroic trades in Azorean tradition, essential to the island's industry and, consequently, to the economic subsistence of local families”.

Alonso Miguel concluded by recalling that “very recently, the Vulcão dos Capelinhos Natural Monument was included in a list of the world's top 100 sites of geological interest, presented by the International Union of Geological Sciences at the end of last October in Zumaia, in the Pais Vasco (Basque Country), given its exceptional scientific value and corresponding to key sites for the understanding of the geological history of our planet”. He also added that “the unique landscape that the Capelinhos Volcano impressively reveals to us is another legacy that the eruption left us, representing a natural heritage that it is up to all of us to preserve and protect”.