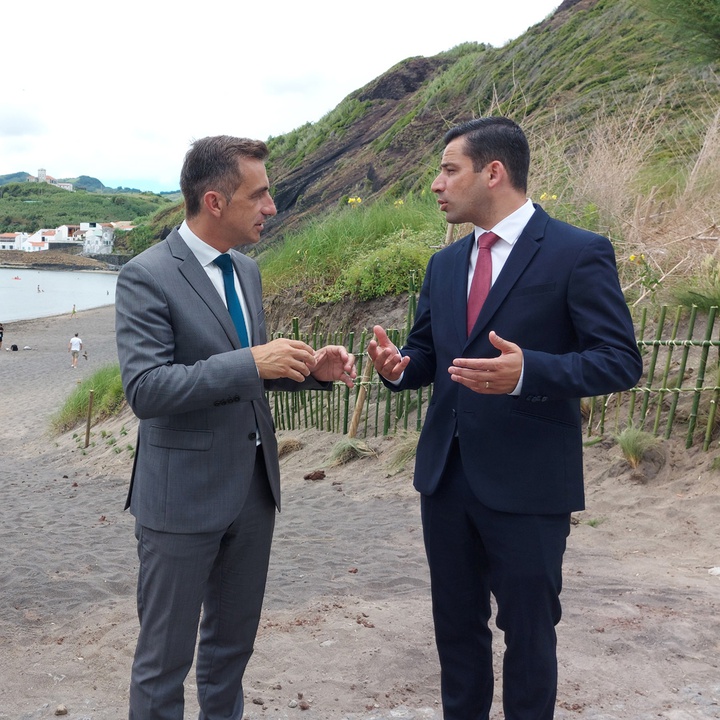 The Regional Secretary for the Environment and Climate Change, Alonso Miguel, visited the new entry to Porto Pim Beach this week, created for the execution of cleaning and maintenance interventions on the beach sand, accompanied by the Mayor of Horta, Carlos Ferreira.

The Regional Secretary stressed that “the Porto Pim Beach has been affected by a massive invasive algae bloom, which has the potential to cause significant impacts in terms of the environment, public health, well-being and enjoyment of the area, as well as from an economic point of view, particularly in terms of tourism”.

“This new reality requires a regular and frequent cleaning of the sand. Thus, it is necessary to ensure adequate access of machinery for that purpose,” said the governor, who also considers this access “important as an alternative for rescue and support to swimmers operations and the access of people with reduced mobility”.

Alonso Miguel mentioned that “it was the creation of this access that allowed this beach, so important for Faial's population and for the Azoreans, to be, at this moment, in proper conditions of cleanliness and safety and that can be full of bathers again, as was verified during the last weekend”.

The Regional Secretary also said he did not understand “that some people consider this intervention as an environmental attack, as it happened on the part of the Observatório do Mar dos Açores and some political parties, such as the PS or BE”. He explained that “it is a ramp built only with unconsolidated materials and without soil sealing, in a marginal area of the dune, which, by the way, was in a high state of degradation and will now have the opportunity to be improved from an ecological point of view, with the planting of endemic species and the placement of palisades to support the dune margin”.

The Regional Secretary also clarified that "contrary to what has been spread, this area is not inserted in the intervention area of the LIFE VIDALIA project, and no protected species were affected". He even added that "all entities with competence in the area of intervention were consulted and issued favourable opinions".

Alonso Miguel concluded by stating that “it is necessary to start resisting political opportunism and to consider and weigh the use of expressions such as an environmental attack, especially by those who have increased political responsibilities, under penalty of trivializing and vulgarizing terminology very important in terms of nature conservation and environmental preservation”.